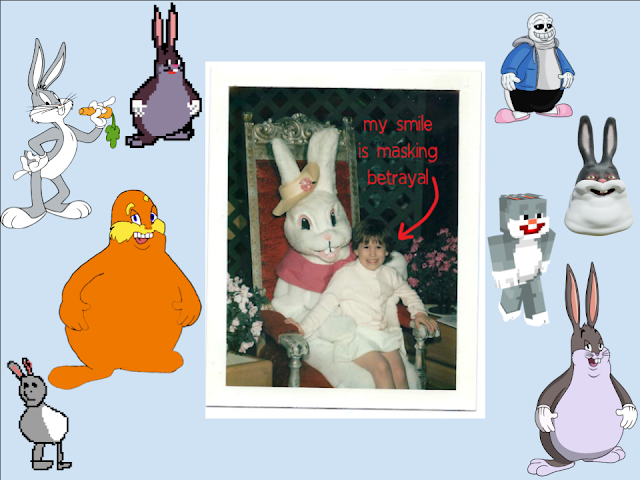 A white bunny peacefully lay sound in his underground burrow snuggled in the twigs and assorted leaves. Suddenly, the bunny awoke by the comforting smell of candied yams. It was the midst of dawn and an annual occupation remain incompleted. As he jumped through the forest cautiously skipping over logs and branches, his duty was awaiting. House by house, door by door, these were common occurrences for the bunny this time of year. His last house remained; a wooden bungalow hidden in the deep forests. As he walked over through the front gate,  a sour smell greeted him among entry. As he reached in the burlap sack on his back, he soon realized that this bungalow had no door to open and no porch to place. An open entry to the bungalow resided and a sense of completion left the poor bunny desperate, for he would be breaking the rules and completing his task at the same time. He imagined doing this quickly but later backed away. The rustle of leaves from the wind chilled up his spine, giving him goosebumps from the waist up. Anxiety had started to kick in as he quickly made an entrance to the house. While grabbing for the last Faberge egg, beautifully embroidered with the smoothest gold, he was immediately greeted by an elderly woman in an old, wooden bed.
"Here dear," she said with a psilosis emphasis on the "H", "Come over to me so I can see your face." Shocked, the bunny cautiously hopped over to the side of the bed. The bunny was sure to keep a good distance from the elderly woman, for his mother had taught him about the six feet rule.
"What nice eyes you have ma'am." said the bunny, for the silence had gone for too long.
Quickly the woman responded, "Oh, the better to see you with dear."
The bunny was shocked; he had just met this woman and did not know what to expect. Surprisingly, the bunny seemed to be pushed to talk to this woman. He actually enjoyed her company since the only person he talked to was his mother. "What nice ears you have ma'am, " said the bunny politely. The bunny was desperate to start a conversation.
"Oh, the better to hear you with dear" the woman responded. Her eyes grew red in fury as the woman was tired of the cliche. Before the bunny could comment about anything else, the old woman took off her costume revealing a hairy figure and pounced at the helpless bunny. Just as this creature was going sink its teeth into the bunny's neck, the bunny bounced in a backward motion. This made the creature fall on the cold, wooden floor, chipping its frontal, scissor-like teeth. The bunny grabbed the last egg and smashed it on the side of the wooden bed frame. Without any hesitation, he reached for the biggest visible chunk of glass and sliced the creature's...
Wow, that was very anticlimactic and surprisingly gory. I think I may have my fairytales mixed up. Anyway, my intention was to tell a child-friendly story of the Easter Bunny and I got lost in my writing along the way. Briefly, I would like to celebrate Easter with you all. I do not celebrate Easter, however, I still enjoy the day.
As you may recall, I live right next to a park and every Easter, I like to see the various families that come to the park to celebrate with their families. Unfortunately this year, due to the black plague, we are on lockdown. In fact, the park that I live next to is so closely monitored by police that if anyone is seen in the park, police will make announcements on the megaphone and even physically escort visitors out if they need to. The first time my neighbor heard one of these megaphone announcements, she got scared and thought that the police were putting everyone under home lockdown.
Since this is usually more than I write for a casual post, I am going to sign off as soon as possible. The reason why I call this post an "embellishment" is because it is the icing on the cake. No spoilers, or anything, however, I just wanted to notify you that something big may be coming up shortly. All in all, I want to wish anyone who celebrates a Happy Easter and for anyone that does not, I want to want to wish you a happy average day. Common sense, am I right?

Popular posts from this blog

May 28, 2019
Writing Children Books | Aliterate
It was a rainy day and it seemed like the rain would never stop. I felt scared, lonely, and vulnerable. At any moment, an electric bolt from the blue would annihilate everything in its path, but there I was. While sitting on my parent's bed and reading my favorite book, Go Dog Go, I felt that nothing could harm me. Then again, I was six and books, like the ones by Dr. Seuss, had actual plots, unlike the books I'm obliged to read nowadays. Yes, I'm talking to you The Giver. Anyways, our last LAL chapter for the year is researching and writing our own children books.

To get a good grade, our teacher had clearly stated multiple times that we MUST incorporate 3 elements of figurative language. To take the easy way out, I am currently in the process of writing a book explaining the Holocaust using animals. When I asked my teacher if it would be appropriate, she read my story outline and thought it was an excellent idea. Turns out, when I used…
1 comment
Read more

April 09, 2020
ZOOM into Quarantine | Aliterate      Wow! So much has happened since May 28, 2019! Considering the fact that the black plague has basically been reincarnated, I believe that humanity is facing the brink of extinction. The Corona Virus is planning the course of Armageddon. You heard me right, the incident of last year is nothing compared to this year's calamities (check out last year's post on Armageddon). The Corona Virus has officially started its world tour first premiering in Wuhan; Corona Virus' entry fee: your life. This fatal virus has altered every aspect of my life. I recently had gotten accepted into my county's vocational high school and the orientation of the school and the placement tests were unfortunately canceled.       On a side note, my aggravation towards quarantine is unparallel to anything else. Shocker, I have to take online school just like everyone else and I absolutely despise the classes. Sure, we get less school work and end a school day aro…
Post a Comment
Read more